At the charity concert in Noormarkku church, Elias and Markus performed a few unpublished songs. One of them can be heard on this video. Grow as We Go, written with their friend Brian Pierce already a few years ago, has been presented at some gigs asTop of the World or Sitting on a Rock – one of these names should eventually be printed on the cover of their album.

Elias and Markus perform in Noormarkku church in Pori on Sunday April 1st at 4 p.m. The concert in the brothers’ former hometown is arranged for the common responsibility campaign, a cause for helping people in need both in Finland and in developing countries. Voluntary program fee 10 €.

Elias takes part in the Finnish national gig day on Valentine’s day 14.2.2012 by beforming at Bar Café Luna in Vantaa. Free entry and showtime at 8 p.m. 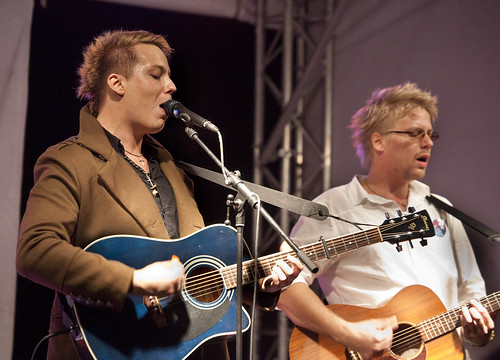 Elias and Markus performed at Korkeasaari zoo to raise money for the Amur tiger and other endangered felines.